All the long practices and late nights finally paid off for Grandview Cheer as they took home the win at the league competition on November 8th.

“We practice for 2 hours Tuesday through Friday, and [we] also have an hour of tumbling class on Wednesday’s, but most of the time there are extra practices on Mondays too. So basically we practice a lot!” Graycee Carlton, a senior who has been a part of Grandview Cheer for four years said.

Grandview cheer put in the work, waiting for leagues to finally come. But the competition did not come easy to them as they faced adversity the day before leagues.

“One of our top girls hyperextended her elbow the practice before league,” senior, Kaileen Lempp said.

The injury was a hard adversity to overcome as everyone on the Grandview cheer team is needed to compete.

“In cheer, every person on the team is important,like we're all necessary to make a routine look how it's supposed to. So when she got hurt right before leagues, we had to change up the whole routine to make it look as if no one was missing. It was a long practice trying to fix everything but it was all definitely worth it,” said junior, Hannah Wegienka.

“The routine changed drastically. All of the formations were changed and we had to put a new flyer in the pyramid,” Lempp said. “Throughout all the changes, we stayed very positive and tried to push through. We ended practice feeling confident ready to compete.”

The day came for Grandview Cheer to compete at Centennial Leagues.

“I did feel a little bit nervous at league, only because we were trying to win for the fourth year in a row and defend our title,” Carlton said.

Grandview cheer finally hit the competition mat, and executed their routine with no complications. 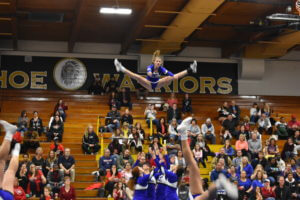 Grandview cheer soon was waiting for awards, gathered as a team. Together they found that they won the 2017 Centennial Leagues.

“Hearing our names called for first place was such an amazing feeling, we can now say Grandview is a four time league champion,” Carlton said. “After winning, the whole team was so excited, we took plenty of team pictures with the trophy and we earned our hit bow keychain for that competition.”

Grandview Cheer is not done with their season yet, and is preparing to compete at state on December 8. Cheer encourages Grandview students to come and watch their performance.

“Grandview students are encouraged to come and support the people who support you,” said Wegienka. “Having many people there to yell with us during our cheer and to help cheer us on will not only help our score, but help all of us cheerleaders perform better,” said Wegienka.

State prelims are on Friday, December 8th at the Denver Coliseum. Currently, Grandview cheer is scheduled to perform at 5:06 pm. Be ready to back the pack at state, and support Grandview cheer as they perform on the mat.

“State is intense, but I cannot wait to perform another great routine with all 19 of my sisters back on the mat,” Lempp added.

Check out more photos on Chssanow 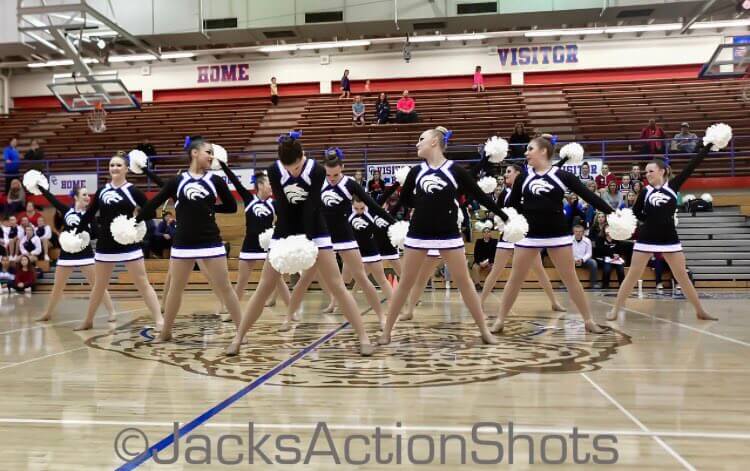 One Routine at a Time