The Fight for Period Prosperity 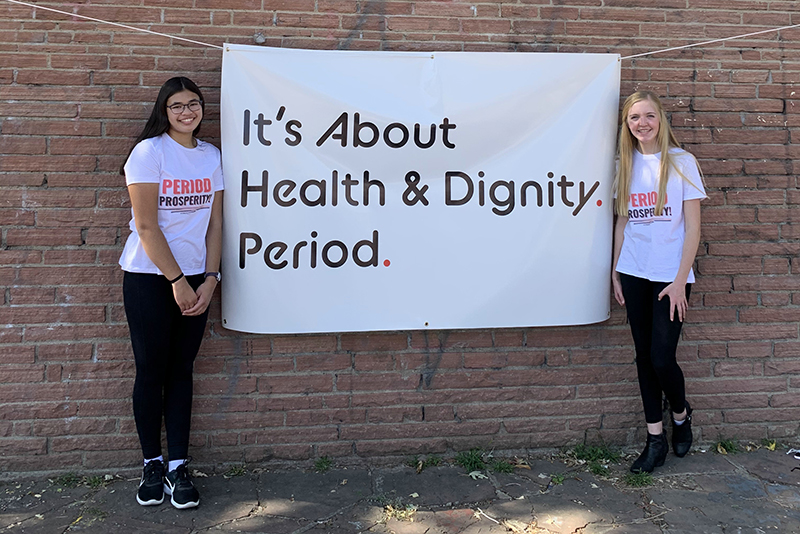 “Period poverty refers to the inadequate access to menstrual hygiene tools and educations, including but not limited to sanitary products, washing facilities, and waste management.” according to AMWA.

But, two freshmen — Lauren Campbell and Annaliese Austin — are trying to improve this silent demon in the Liberty Middle School community.

“We are doing a project for our Girl Scouts silver award and we named it Period Prosperity,” said Campbell.

According to Austin, the project must include over 60 hours of total service, and serve as a lasting impact on the local community.

The pair originally became interested in menstrual equity when Campbell stumbled across an online forum.

“I was in a shop because I wanted to buy period underwear, and they had a whole section on their site about menstrual equity,” said Campbell. “It was something I was interested in trying to help fix.”

With further research, the partners came across an even greater problem causing menstrual inequality, one that could be easily solved by our own government.

“There is a thing called the Tampon Tax, where period products have a luxury tax on them.” said Austin. “That just makes it even harder for people to buy them.”

This tax puts impoverished menstruators in a difficult situation when it comes to spending the limited funds that they have available and having to divide up necessities.

“Women are more likely to be impoverished because of their period,” said Campbell. “It is seven dollars a month for period products, which is an expense that some people can just not afford to make.”

Austin and Campbell also called on personal experiences from their middle school years when taking inspiration for their campaign.

“We’ve had friends of ours who weren’t able to attend school while they were on their periods because they did not have the necessary products,” said Campbell.  “Which is what inspired us to try and make a change in our community.”

When it came time to start the campaign, the girls began with a goal of supplying products to Liberty.

After a long process, they finally connected with someone who shot their expectations out of the water.

“I went to a feminist conference over the summer where we found a contact named Charlotte Leflufy,” said Campbell. “ She said we’d love to donate and we’ll give you 75,000 pads.”

With the physical products in hand, the pair needed a way to ensure and dispense them at the middle school.

The dispensers also serve to keep the products available to all students, along with a limit on the amount that can be taken.

“The Go Aunt Flow dispenser has a delay on them so that people can’t take a whole bunch of pads at once,” said Campbell.

The staff at Liberty was also very supportive of the girls’ efforts once they arrived with the supplies.

“They’ve been pretty supportive,” said Austin. “We are in contact with Mrs. Hale the most right now, and she is helping us find out when to install them and where the pads should be delivered.”

As for the students, Campbell and Austin are anxiously waiting to see their reactions at the start of next year.

The pair also spoke passionatly about their hopes for the impact their project will have on the school community of Liberty.

“Our hope is that we can help students who wouldn’t be able to afford the products go to school during their period,” said Campbell. “Hopefully helping destigmatize periods as well.”

Along with work at the middle school, they are also considering a similar campaign at the district level.

“We are thinking one of us is going to try to get the school district to supply the schools with period products,” said Austin.

Another hope for the pair is to implement similar dispensers in both bathrooms, not just the girls.

“We also want to try to get them in both bathrooms, cause of transgender males,” said Austin.

“They menstruate too. But they are male, so they shouldn’t have to go into the girls’ bathroom.”

The message that the pairs want to spread is simple — a lot of people menstruate, and no one should have to suffer because of that.

“I feel like if you have products out, and it’s a clean normal thing, it’s not a big deal,” said Austin.