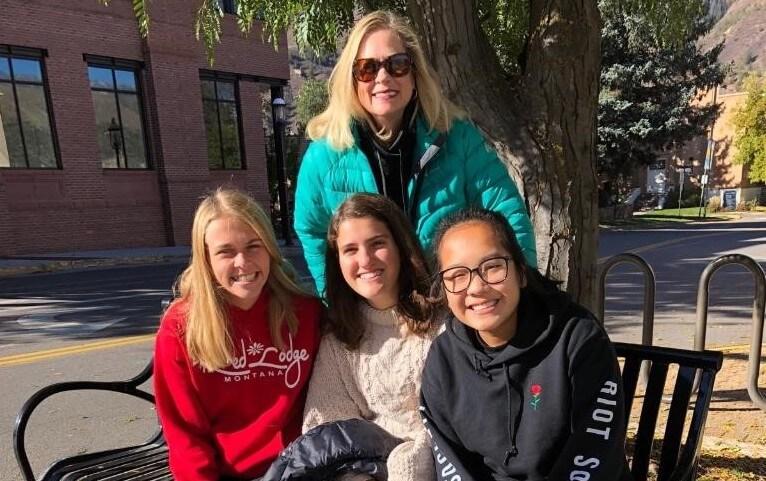 After traveling over 5000 miles, from the Basque Country, Spain, to Colorado, Elene  Barrenetxea, Grandview junior, has grasped every opportunity that has come her way.

Her story is unique because she is staying with Mr. Luetkenhaus, a teacher in the Social Studies Department here at Grandview.

Elene explains she was brought here by the positive foreign exchange experiences of her friends.

“Studying abroad is getting more popular among Spanish high schoolers, and I knew a couple of people who had spent a school year in the US, including my sister,” said Elene. “Every single one of them had a great year and that was something that made me think about being an exchange student.”

She also possesses her own desire to assimilate into a new culture.

“I also wanted to improve my English, and I wanted to see how the education system in the US was. I wanted to live in a different culture, too, because I thought that would help me to be an open-minded person and to understand different societies better.”

She made it a point to have as many new experiences as possible, and has also offered her own perspective to those around her.

“Elene truly has embraced the opportunity to have ‘American’ experiences, so she has enthusiastically involved herself in the routines of our family and life at Grandview,” said Mr. Luetkenhaus. “Among the many ways that our lives have been enriched have been from the perspectives that she has offered in conversation – whether about music, cuisine, education, politics, and so forth.  I really should take more advantage of working on my Spanish, but her English is so good!”

Hannah Luetkenhaus, junior at Grandview, has also learned a lot from Elene.

“I’ve always known that everyone has a story, a family, etc. However, this year it really clicked for me,” explained Hannah.“I feel like I’ve gotten to hear about not only Elene’s family and culture and (obviously) meet a person from the Basque Country, but also talk to Elene’s friends and family over the phone. It has been great talking and seeing people that I would never have known or known anything about.”

Elene and the two sisters have grown their relationship this year, through both work and fun.

“Gigi, Elene, and I have all gotten to be pretty good friends this year. We do the occasional boba or donut run,” said Hannah. “Having a classmate at home has been great for collaboration with homework. We have the same chemistry class so it is nice having someone to work on the assignments with!”

Elene’s initial reaction, was amazement at how large-scale everything was; the Basque Country is a lot more tight-knit.

“Everything is a lot bigger…The roads were really wide, the houses were extremely big…Most people in Spain live in small flats…When I first came to Grandview I also thought it was enormous. And so crowded,” said Elene. “I come from a very tiny school with 1,000 students from 2 to 18 years-old, so everyone had known each other since they were babies. I thought it was so weird that people didn’t know everyone at the school.”

Elene was surprised by the differences in transportation.

“In Spain, you can walk everywhere, and we use a lot of public transport, and we don’t really need our cars.”

She also noticed differences in diversity of people.

“One of the main differences that I’ve seen between the US and Spain is that there’s way more racial diversity here. After all, this country was built by immigrants from all over the globe and every single student at Grandview has a different ethnicity, which is great,” said Elene.

“I was walking with another girl through the doors next to the library, and as I was used to the lack of space in Europe, I went through the same doorway that she did. I don’t think she really appreciated being squashed through the door.”

The same goes for the differences in driving/walking conventions between Europe and the US.

“The first day of school, when I was on my way to my second period, I started to walk on the left side of the hall. Everyone was walking towards me which was very overwhelming. No one told me that I had to walk on the right side!” Elene said.

Aside from school, Elene has also encountered some light-hearted experiences in her home.

“We’ve occasionally teased her about her pronunciation of a few words in English, but there have been very few opportunities because of her great fluency.  Elene is so good-natured that she has taken it all in stride,” said Mr. Luetkenhaus. “She has let me know that some of the expressions that I know in Spanish are a lot more vulgar than I thought, so I’m not using those anymore.”

From an education perspective, the two countries are very different. Elene described that Grandview has a wider variety of course offerings than her Spanish school, and also tends to be more flexible with course choices.

“In Spain we only have about 9 classes, and we are only allowed to choose 4 out of those 9. The rest are compulsory. Once we choose a class we need to keep taking that class for the rest of high school.” Elene said.

The schools in Spain also have crucial tests at the end of 12th grade that make stress levels very high senior year.

In the US, junior year is seen as more crucial than senior year, whereas, in Spain, the two go hand in hand, and are culminated with a critical board exam. Grandview also has more flexibility with class choices; your schedule is essentially as hard as students make it.

“The education system in America gives you the ability to take easier classes so I would say the classes are easier. However students who are taking all AP classes might be having very hard classes too,” Elene said.

One of the many things Elene has missed from home is the food and atmosphere of her town.

“I miss the Spanish food a lot. I come from a coastal town so I’m used to eating fish almost everyday, and I miss it so much! And I truly miss the ocean,” said Elene.

The Luetkenhaus family has exposed her to opportunities to occasionally get back in touch with her Spanish culture.

“My daughters recently took her to World Market, where she bought a few ‘comforts from home’ – including chorizo.  We’ve been able to see a couple of soccer games on TV featuring Athletic Bilbao – the great Basque team. She also has been to Boise, Idaho before, where there is a substantial Basque community, which she enjoyed tremendously.  We are determined to make paella before she leaves,” said Mr. Luetkenhaus.

She adds that she exchanged the coastal scenes in Spain for the wintery scenes that Colorado has to offer.

“I got to experience a snow day! It hardly ever snows in the part of Spain that I live in,” said Elene.

The biggest lesson Elene has learned from this experience has been the alacrity to try different things. For instance, she has  gotten involved with sports at Grandview.

“One of the great things about Grandview is the sports! It’s so fun to be part of a team and play for your high school,” said Elene.

“I admire her pursuit of athletics – she joined the cross country team (despite never having run before) and the swim team (despite not liking to get up super early to jump into cold water).  She definitely is looking forward to tennis season!” said Mr. Luetkenhaus.

“When Elene came to the US, she automatically wanted to do cross country because she had heard from her friends, family, and me that it was such an inclusive and family-like sport,” said Hannah. “Elene and I both did cross country this fall and it was nice going to meets with her and cheering her on! It also allowed us to have the connection of knowing the same group of people.”

Elene has adjusted to change so quickly and has pursued various activities to become more involved in the community. She has truly made the most of the foreign exchange experience that she has taken on, and continues to do so with a positive and open-mind.