The Wolves Take On Nationals 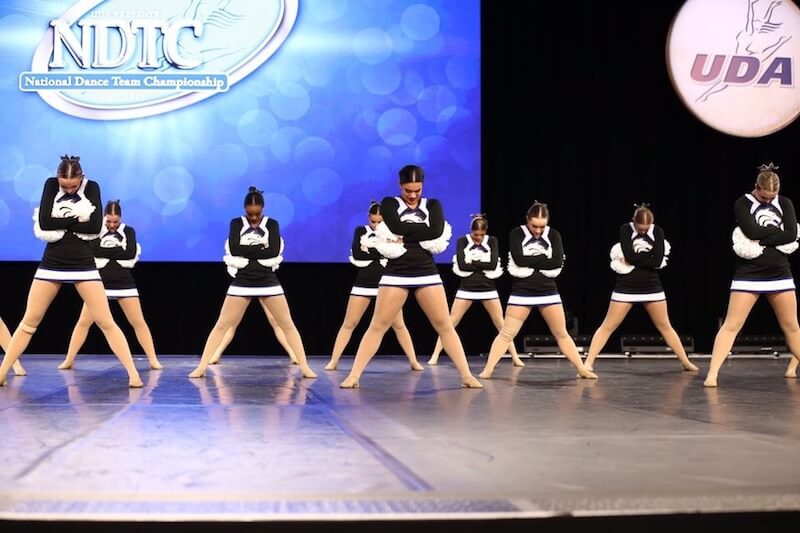 After working hard for months and tirelessly perfecting and changing routines, the Grandview Poms team finally went to nationals to compete against 82 teams from around the country.

“We got 7th place in the small varsity poms division, we were really proud of our team and the work and effort that we put in.” said sophomore Elise Ancell.

Leading up to the big competition, the team practiced everyday to steadily improve both individually and as a team for the competition.

“We had a lot of practices before we left. We practiced every day for 2.5 hours to 4 hours and we just practiced as much as we could.” said junior Brynna Goodwin.

Long practices are only one part of the road to nationals. Throughout the season the routine was constantly going through changes up to the actual competition.

“When we were at nationals we had a parking lot practice, and they changed the dance the night before. They’re constantly trying to make the dance to where it needs to be,” said sophomore Elise Weaver.

A dance routine requires a different approach comparatively to other sports such as football and track so the girls have to prepare differently.
“For poms you have to be running while smiling while doing your arms and moving your feet and pointing your toes and stretching through your legs, and it’s just a lot.” said Ancell.

As several new members to the varsity team were previously on the JV team, the adjustment between the two teams was also a challenge that the team had to overcome.

“I was on JV, and there is such a huge leap between the skill level on varsity and JV,and your dance ability becomes better and the way you handle hard or stressful times” said Ancell

The girls’ talent, accompanied by their passion was the perfect combination for a good performance, as it helped the team work together to get over their nerves.

¨The first performance we did wasn’t our best because we were a little bit nervous and shaken up. We kinda just went back and reanalyzed our video and went back the next day with a bunch of power and teamwork.¨ said sophomore Mallory Hamilton.

The end of the nationals competition signifies the end of the season. Looking back at the best moments they had this year the season allowed the girls to grow as individuals in their technique and personally.

¨Personally, I improved by endurance and just increasing my leadership and learning how to become a bigger and better leader throughout the season,¨ said Goodwin.

Furthermore, some team members admit that the competition has lead them to improve in ways that are beneficial for their future.

“Technically we [ as a team] are a lot more sound, and turns and jumps are better and now I know time management,¨ said Ancell.

By leaving nationals on a good note the girls can all agree that this season has been one to remember.