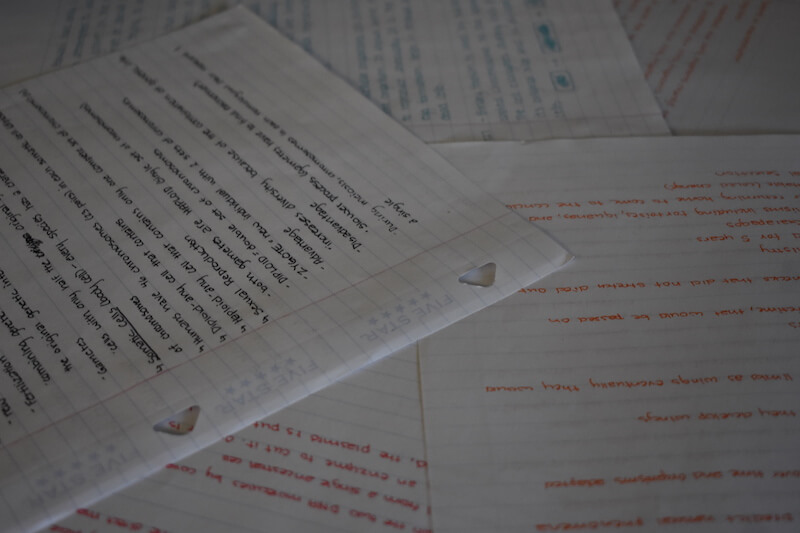 It’s about that time of year again. The sunshine, the impending joy of summer, but more importantly… finals. Our teachers have been working hard to prepare us for finals week. At least that’s what they think. In reality everyone knows that no one is ready and we are all mentally preparing for the all nighters of cramming and procrastination. Nothing makes us more productive than the last minute.

While finals bring much stress and sadness to the students at Grandview, there are those among us who are actually prepared. Shocking, we know. One of these rare specimen is Molly Stang, a 4.0 student who knows how to play the game.
Brutal is a good word. Long, multiple days.
“[I] study about 2 hours a night. I break it up so that I don’t get too bored and stay motivated. If I focus on something for too long, I can’t take it anymore. Then I just need to walk away for a little bit, focus on something else, then go back,” said Stang.

But not all of us have the time or the motivation to sit and study for hours a night, and focusing while cramming can be quite difficult.  To help focus, it’s best to just hunker down and get into your own world. Grace Holmes, a sophomore, is no stranger to late nights spent trying to get any additional information to stick in her head.

“I listen to video game music. I also try to get away from anything that could distract me like food, my dog, and my family,” Holmes said.

It is important to remember that while cramming, it’s your last shot at having a chance of passing the final. But you’re not alone, everyone is stressed in some way or another. It’s how you deal with it that will help you to get through finals and keep some emotional stability.

“I don’t really have a way of dealing with it,” said Stang,  “it’s just there and you can’t change it. I know I’m gonna be stressed, but once I get through finals week everything will be fine. I just need to remind myself that it will all be okay if I study as much as I can, and the worst case scenario is not getting the grade I wanted.”

Although successful students offer valuable insight towards finals, teachers may offer the best advice regarding the final. Ashleigh North-Skelton is an AP social studies teacher with expert knowledge on AP finals and how soul crushing they can be.

“Brutal is a good word. Long, multiple days.” North-Skelton said “For AP world, AP Euro, AP US, we all tend to give mostly a DBQ, you’ll get an LEQ with three possible prompts, it’s about 60 minutes for the DBQ, 40 minutes for the LEQ, and three SAQs that are 40 minutes, and lastly is the multiple choice with 55 questions. In Human [Geography] you should be able to do essays and it’s all multiple choice.”

Yikes. It’s not all doom and gloom, however. North-Skelton assures that as long as you are prepared ahead of time, AP finals really aren’t anything to stress about.

“It’s healthy to be a little worried, it keeps you on your toes, but if you have created a study schedule for yourself that you are trying to follow as close as you can then you have nothing to worry about.”
Study groups I can not speak more highly of.
Okay, that sounds better. But what if you’re an AP student who hasn’t been studying at all? Well, then it’s time to start panicking. North-Skelton states that the procrastinators have the most to be worried about with their finals, but it’s never too late to get some extra studying in to make sure you pass your final.

Let’s say that you have already messed up your chances with this final, considering you’ve procrastinated too much or haven’t really studied at all. How are you supposed to improve next year? Studying in long term increments before your final may be the most beneficial to not only passing but getting A’s and B’s on your final.

“It’s impossible to take [months] of material and know it straight up, and if you try to cram right before you’re never going to make sure you know it. Studying over long increments and reviewing a lot more often allows you to see a lot more holes in your learning earlier so you can address those before you get to the exam,”

Other than studying over long increments of time, North-Skelton also assures that study groups may be the best way to study for finals.

“Study groups I can not speak more highly of” North-Skelton said “AP is a team sport, if you’re doing it alone you’re doing it wrong. The best thing to make sure you know something is by teaching it to others in a scenario like a study group. You’re supposed to be teaching each other so you can more readily see your holes and see what you need to study,”

While all students at Grandview may be close to the breaking point due to finals, as long as you’re studying and doing the right things it won’t be so bad.