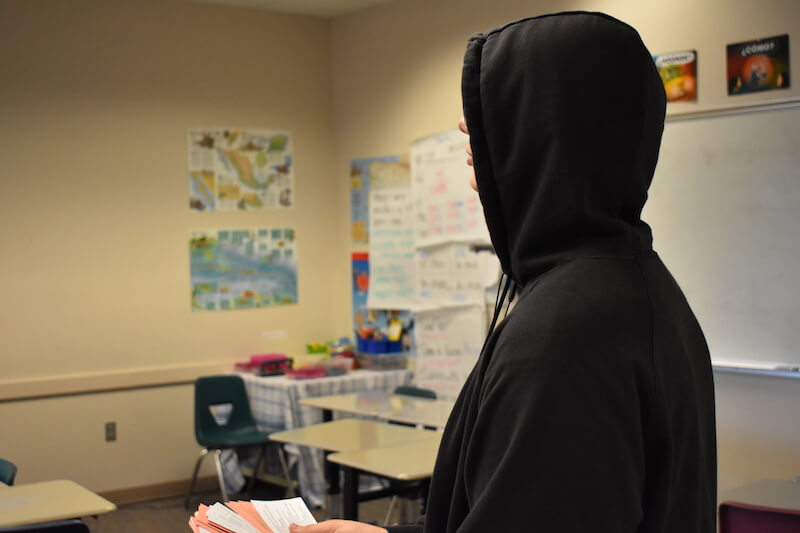 Want to learn how to make any AP student tremble in fear? Just say the simple phrase: “stand up quiz”.

The dreaded stand up quiz, a concept as old as time itself, implemented by the nefarious AP World History teachers at Grandview High School to torture their students every class period.

“A stand up quiz is a test of the recent material, but it also (is) a test of upcoming material,” Devin said.

In a stand up quiz, students stand up with the rest of their class and their teachers ask them a question relating to one of the notecards they had to study. They are usually daily occurrences and eight to twelve notecards are assigned over the week for students to study.

Devin has participated in countless stand up quizzes (most likely totalling over 50 in this year alone) and is very accustomed to the potential emotional rollercoaster that may follow. According to Devin, one of the reasons that stand up quizzes cause emotional distress to some students is the social aspect involved in them.

“I have had friends that have done stand up quizzes, and as soon as someone looks at them, they feel underestimated and looked down upon. It seems like a spit in the face,” Devin said. “The fact that everyone is an audience makes it so much more stressful.”

In most cases, the immense pressure felt during stand up quizzes could be the only thing dictating a student’s mind, distracting them and possibly hindering their performance.
It seems like a spit in the face.
Devin describes the process of studying for a stand up quiz as very tedious, as it seems to be just pure memorization.

“It’s just raw information that you’re going over, there is no actual interesting parts and seems like something you’re not comprehending, just reciting.”

While stand up quizzes may seem monotonous and stressful, AP World History teacher, Ashleigh North-Skelton argues that they can actually be the opposite.

“It is an opportunity for a kid who has studied or who has not – both can learn from this – to basically stand up with their entire class and be asked one question off of a card to show that they understand the concepts,” said North-Skelton. “It should last 30 seconds.”

North-Skelton attributes to some of the anxiety that comes during stand up quizzes the prevalence of cell phones within American schools.

“What I noticed from your generation (in 12 years of teaching) is that as cell phone usage comes up, our ability to have conversations in person get harder and harder. Kids tend to get quieter in class, instead of where I noticed 5-7 years ago it was constantly kids raising their hands and asking questions. I think as we evolve into this, we’re not as good at communication.”

North-Skelton sees stand up quizzes as a way for students to break out of their social shell and create a community within the classroom, creating opportunities for kids who are shy in the classroom to expand their knowledge and understand the content better.
It is an opportunity for a kid who has studied or who has not – both can learn from this.
Even if kids are still nervous about standing up in front of everyone and getting something wrong, North-Skelton reassures that there are alternatives that do not require a student to stand in front of everyone.

“I want you to come in one on one. If it’s the nerves, come in and see me. I’m five foot five, so I’m not super intimidating, so walk through the door and we can do it just one on one.”

Not only are stand up quizzes helping the student understand content, but according to North-Skelton, they help teach students’ life skills as well.

“I hope that I’m not only teaching you guys school skills, but I’m teaching you life skills,” said North-Skelton. “My hope is that when you are forced to do it in college or in other classes, it won’t be as intimidating, and that’s a social skill that I think needs to developed. It’s easy to say anything you want behind a keyboard, but it’s harder to display your opinions or knowledge or ideas in a big class setting.”

Not only are the social skills beneficial, argues North-Skelton, but studying skills and knowledge is also improved through stand up quizzes. If a student misses a question that they thought they could answer or misses a question on something they didn’t even know existed, it displays an opportunity for the student to revisit their notecards and be better equipped for future stand up quizzes and potentially even exams.

Stand up quizzes may seem frightening towards some AP students, but what we must remember is that there are ultimately here to help us so we can succeed in our AP tests.

“I don’t want this to be a monster thing that we’re doing to kids with stand up quizzes, because that’s not our intention, we’re not here to destroy kids. It’s my hope that we’re studying and this is a way to display knowledge and it’s my hope that kids will learn from each other, they’ll hear the information more, and that’ll help with the retention even if you’re not good at the stand up quizzes,” North-Skelton said. “Don’t be shy, come in, see me from help.”

As AP tests come closer and the studying binges start, make sure to remember your stand up quizzes, and above all else, study your notecards.