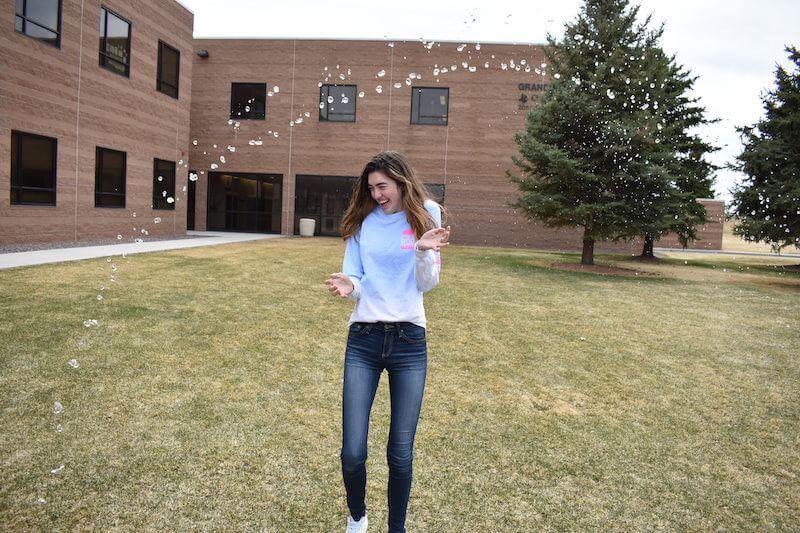 There’s always something that teenagers are obsessed with.

In the 70s, it was roller skates and The Rocky Horror Picture Show. In the 80s, it was boomboxes– picture John Cusack in Say Anything— and rubik’s cubes. The 90s brought new fads: rollerblades, “The Macarena”, and boy bands like the Backstreet Boys and ‘NSync– what girl didn’t drool over young Justin Timberlake? In the 2000s, it was low-carb diets, over-sized sunglasses, flip phones, and MySpace. Finally, the 2010s gave way to social media, selfies, twerking, the ever-expanding Kardashians, and just last year, tide pods.

Now, the new biggest question and topic is, “Is water wet”? While some people I’ve talked to have never heard of the controversy surrounding the topic, the majority of the student and teacher population are familiar with it.

I would say water is wet.

If you’ve been pulling all-nighters for the past four months thinking about the answer, wonder no more. Grandview biology teacher Rob Graham gives the correct answer, and the science behind it.

When I first asked his opinion on the subject, his thoughts went everywhere, probably due to the fact that the question is so vague.

“The first thing that came to my mind was that some people say that wet is like water causes wetness. And I guess my first argument to that question would be, well can you be wet when you have oil on you? Would you call yourself wet? I would think most people would say, ‘Oh, I’m wet’. And that’s not water, so I don’t think that bodes well for the definition of being wet is a property of water,” said Graham.

He was struggling to properly answer the question without a definition of water. I expected this to happen, so when he asked me if I knew what it was, I pulled out my handy-dandy smartphone and showed him my screenshot of google’s dictionary definition  of the word.

The first definition that came up called wet an adjective: “covered or saturated with water or another liquid”. Another one claiming it to be a verb said that wet was to “cover or touch with liquid; moisten”.

So, after giving him the denotation of the word, he seemed to clear up his answer.

“I would say water is wet, because it is covered by other water molecules,” said Graham.

He continues, claiming that an “individual water molecule by itself can cause wetness, but it itself is not wet”.

However, he explains that this is rather irrelevant with the question.

In simpler terms, “water as we know it, as we see it, that’s obviously millions of molecules, therefore water is wet.”

So, straight from science itself, the answer to the newest controversial topic has been solved…. Water is wet.

However, Grandview Junior Elfaz Wondirad claims that “it’s just a stupid question that people make up to make other people confused. It makes no sense.”

So, I guess now we just wait for the next out-of-whack question for teens to come up with. Got any ideas?