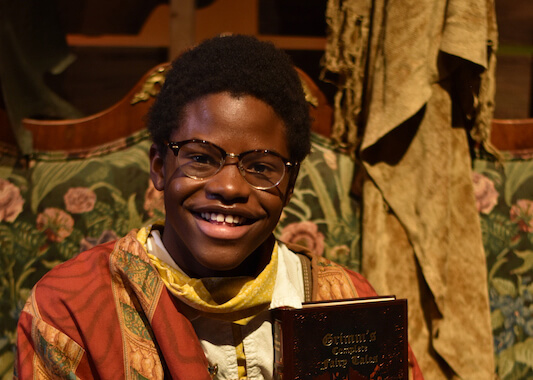 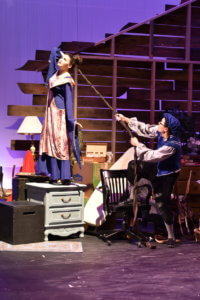 The Brothers Grimm Spectaculathon, told by two narrators, turns the fairy tales of the Brothers Grimm into a captivating, fast-paced, complex, comedy that attempts to combine all 209 stories,  ranging from classics like Cinderella and Hansel and Gretel to more bizarre, obscure stories and characters like The Girl Without Hands and The Crab People. The audience was kept laughing from the very start as the hectic stories intertwined to create an amusing, but somehow organized chaos.

The Brothers Grimm Spectaculathon spotlights the freshman and sophomore actors, giving them a chance to earn a lead role. The play was cast, and performed in just a month, but the work ethic was no different than the musical or play.

“It’s the same amount of effort put in, same process of having costumes and scene production value, but the froshmore gives those younger grades a greater opportunity to have bigger role experiences,” said Jake Rogers who one of the student directors for the show.

Alongside the technical theater teacher, Mrs. Dykstra, whodirects both the technical aspects and the play itself, juniors and seniors can apply for technical leadership positions or work alongside the actors as a student director.

The student directors, Erik Peterson, Jake Rogers, and Gregory Aarestad have attended every rehearsal. They have helped cast, direct, and block the show.

“Given the short amount of time and the amount of work she [Dykstra] has, we’ve helped pick up the slack,” said Rogers. 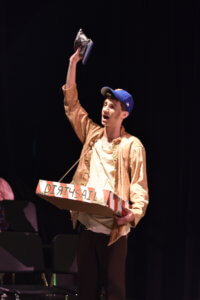 “On some level, it’s different working with the more skilled actors Grandview has compared to children’s theatre, but both still carry out an artistic vision,” said Peterson.

Rogers has never directed before, so the play has given him a new perspective on acting.

“This has helped me as an actor much more than I thought it would, being on the other side of it. When I’m giving other people feedback, it sticks with me more, so I can bring that in my own acting,“ Rogers continued, “It’s a huge opportunity.”

“It helps me as a reminder that no matter how far you get, you still have to revert to those basics sometimes,” said Rogers. “If they’re ever not heightening their voices or their physicality, we’ll give them that reminder to make things bigger, and I have to remember that as well.”

The Brothers Grimm Spectaculathon requires actors to go outside their comfort zones. It requires for new choices and creativity that not only do the actors need, but the crew and the directors.

“Every actor no matter how old they are, are going to bring their own artistic licensing to the table. It’s the job of the directors to develop that into one cohesive production and into one big production,” said Peterson. 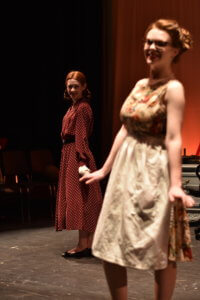 The show is anchored by its comedic timing and overall chemistry of the ensemble.

“When it comes to tech leadership and Dykstra and us we’re all a big team. We’re all working to accomplish the same goal, and that can be said about everyone involved in the production,” said Peterson.

“That’s why we all do this together; it’s to create a beautiful production.”

The show also has created a bond within the members.

“The entire cast and crew is a family, we tell each other things, especially in the dressing room,” says Chloe Wheeler who plays Gretel. “We’re good buds.”

“We’re touchy, we’re afamily, we all love each other,” says Alison Kirdone who is on carpentry crew.

The stage is set up quatre-thrust style with seating on the stage,.

“The set is not as pizazz like the Drowsy Chaperone; it’s simple and gives focus to the actors,” said Kironde.

The show allows for a ton of audience participation.

“The onstage seating is helpful, because you’re closer to the actors, and you can see the emotion on their face. It makes you feel like you’re a part of the show,” said Wheeler.

So if you’re feeling Grimm, come see this spectacular production Friday the 9th and Saturday the 11th at 7:30pm in the Grandview auditorium.